You are here: Home / Fundraising / My First Tiara: A Fundraiser Is Born! 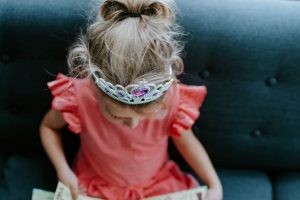 If you are new to a fundraising role, you may know more than you think! In the hunt for a tiara and a college resume activity, I learned how much I already knew as a teenager, seeking my very own “Queen of Hearts” tiara – and some of what I learned about fundraising, I still use today.

I was an over-achieving junior in high school when I was invited to participate in the Central New Jersey chapter of the American Heart Association’s “Queen of Hearts” program. A pageant? There would be a party and I needed a red dress. My first reaction: I was definitely the wrong girl for that job.

But as my mom’s friend (I now realize she was an ideal event committee member) patiently and persuasively explained, this was a chance to take on a new challenge and add an impressive extracurricular to my college applications. Oh, right! Suddenly, she was speaking my language. And that is how before I really knew what I was signing up for, I was hooked.

The competition was straightforward: the teen who raised the most money in support of American Heart Association’s local programs would be crowned the “Queen of Hearts” at the annual gala. And, yes, the winner got a tiara. Although I wouldn’t have called them by name at the time, I now know that my fundraiser instincts kicked in and I developed a set of tactics around the strategy of a winning campaign.

I started with letters. Yes, I ran a direct mail campaign using my database (also known as my mother’s address book). I mailed letters to everyone I knew (and a bunch of people I didn’t) that highlighted the mission of the American Heart Association. I also detailed the reasons they should support me in my attempt to be crowned Queen of Hearts. The checks started coming! I got the same rush of excitement then that I do now when I review campaign data. IT WORKED! (This may be where the happy dance was invented.)

Next step: get in front of people and think about corporate support: check and check. I coordinated speaking engagements at Lions Club and Rotary meetings. Previously I knew nothing about these groups other than they were the reasons for my father to miss dinners sometimes. But now, I had a whole new perspective: they were MY audience. I held court in front of those rooms of grown-ups – and was delighted to witness that  they wanted to hear what I had to say! They were interested in the mission, and I had knowledge about the work of the Heart Association and how they could participate in local programs. This was the limited corporate silo of my Queen of Hearts fundraising plan, and the checks came in again, this time from business accounts.

My next fundraising instinct: get the word out to more people! All of the candidates had a chance to participate in the chapter’s PR campaign for the event, which took the form of a series of radio interviews. I shared what I knew and allowed myself to feel like a celebrity. Undeterred by sharing the spotlight, I took the opportunity to talk about my campaign’s success.

Another ingredient for success was building a team. I recruited friends and family members to join me for weekend activities at the local racetrack. My community and volunteers helped me shake cans, making noise to get people’s attention, and asking for their change, or sometimes even a dollar, to add to the can for our cause. Rolling coins – we had to roll all those coins into paper wrappers to deposit them into the bank – may not be a good source of income in 2021, but we sure rolled a lot of coins over that semester. And that was my on-the-job training in donor pyramids and the importance of balancing grassroots fundraising with a major gifts program.

I didn’t know at the time that I was building a base of knowledge that I would carry into my career.

And, of course, I won the title AND the tiara.

Along with its sparkle, the tiara brought me lessons that I still use: