You are here: Home / Fundraising / Tugging at Some Threads: Looking for Inspiration In All the Different Places

The following is an excerpt from Brock’s bestselling 2020 book From the Ground Up: Digital Fundraising for Nonprofits. Hyperlinks have been added for this post for further inspiration, as well as some additional resources from Brock at the end. This article does not contain any affiliate links.

At some point six or seven years ago, I lost interest in books about fundraising, blogs about fundraising, podcasts about fundraising, presentations about fundraising, and so on. I felt some guilt about this because I know how hard my peers work to gather and share their knowledge. I wondered if it was a sign that maybe I should step away and pursue a whole new profession. I still enjoyed my work though, especially interacting with donors. I also still felt like there was so much ground for our profession to cover. So, I struck a balance by staying focused at work, while outside the office I began tugging at some threads that had been within reach for decades but never pulled.

I cleared out my iTunes queue, and restocked it with new podcasts about design, architecture, science fiction, philosophy, and pop culture. Before long, I was having far more ideas and inspiration for fundraising than I ever did reading or listening to fundraising content.

This habit of finding inspiration in unconventional spaces and bringing it back to the fundraising sector was a turning point for me. The projects that spun out from these ideas—whether they were successful or not—helped me to gain some recognition as being a creative, innovative fundraiser. I am feeling most fulfilled when I am bridging traditional tactics and strategies with interesting and novel applications. Whether you’re reading this blog (or the full book) because you’re new to the profession, or you’re a veteran who wants to bring your digital program up to snuff, I highly encourage you to stay curious in the areas of your life that are far from being related to fundraising.

One source of inspiration came from the late 1960’s in the form of a DIY book called the Whole Earth Catalog. Nowadays the Whole Earth Catalog might be best known for the four-word farewell on the back cover of their last edition, “stay hungry, stay foolish” which Steve Jobs quoted in a viral commencement speech at Stanford in 2005.

Stewart Brand and a collective of collaborators, published the first Whole Earth Catalog out of an earnest pursuit to understand and explore the many systems we all live in, how they interlock, and how we as humans might best integrate and move through them in a responsible way. Brand summed up the catalog’s purpose with just three words on the front cover: access to tools. It was very much a catalog, in that it was a curated list of guides, magazines, novels, and manuals that were accompanied by a short description and instructions on how to purchase it directly from the author or publisher. What made the catalog so fascinating was the ethos they were able to articulate in the marginalia, imagery, and the curation itself—the juxtaposition of geodesic dome blueprints and an introduction to beekeeping just pages away from computer building guides (in 1968!), cybernetics and a text on the mind of a dolphin sent a clear message that life within a “whole system” is both rife with contradiction and ambiguity, but also a heck of a lot of fun.

Another well of inspiration is the work of architect and design thinker, Christopher Alexander. His most lauded work, “A Pattern Language” was released in 1977 co-authored with Murray Silverstein, and Sara Ishikawa. In it, he describes 253 distinct “patterns” which are features within our built environments that solve a specific problem. For example, a doorway is a pattern, in that it is the solution to the common problem of needing to separate one room’s purpose from another. But there are hundreds, if not thousands of variations on how to design a door. The patterns nest within each other, from the largest pattern, “town” right down to the smallest, “things from your life.” As patterns are put to use and they interlock, they begin to form a language—not so dissimilar from the ways that we connect words to form sentences within a language. What set Alexander’s text apart from earlier architectural writing was that it blurred the lines between practical functionality and philosophical treatise on how we might create metaphysical spaces for creativity, empathy and connection within the physical spaces that protect us from the elements. Throughout this book and each time I’m fortunate enough to present or lecture, I try to subtly do something similar – fulfill a practical need, but signal an awareness that there is a network of possibilities and applications just below the surface.

The idea that we live and work within languages fascinates me to no end. The bulk of this book can be read as a series of patterns that interlock to describe your digital fundraising programs and strategies. But if this is true, it’s more dictionary than novel. It’s what might refer to as you craft your own story, and others craft theirs, and we all contribute to a larger, growing body of knowledge. Alexander and his co-authors tout their method as “a timeless way of building,” because while they proposed a general approach for solving problems, they weren’t explicit in exactly how to build it. They left that up to us. I’ve thought a lot about “A Pattern Language” while writing this book, and have tried to provide you with general approaches, and leaving the specific design execution to you.

This leads into my last diversion, which comes from the world of visual arts. In a 2015 interview with author Steven Johnson, Brian Eno cracked open a whole new space in my brain with this statement:

There is a hangover of romantic assumptions of art, that art intrinsically has “something.” I don’t think art intrinsically has very much at all. I think that nearly everything that it has is conferred upon it by our collective history of experiencing art. So, we create the value. I think when something is exciting to you—a picture or a piece of music—what’s exciting is that you’re hearing the latest sentence in a conversation you’ve been having all your life. When you look at a painting, you don’t just see that painting, you see every other picture you’ve ever seen. That painting is in the context of every painting you’ve ever seen.

This resonated with me immediately, because if we are to consider ourselves creative, and therefore a sort of artist in our fundraising roles, then we have to cast our current and future donors as the patrons of our art. And if that is true, then that means every message or appeal we send does not stand alone. That message—like the paintings that Eno describes—is only the latest sentence in a conversation the donors have been having all their lives with the charities and causes they support. This means that we fundraisers have a shared responsibility to ensure these conversations are meaningful and honest. Because if they aren’t, then one bad apple could spoil the whole bunch.

If you’ve made it this far—thank you. You’ve opened the black box, and are a better fundraiser because of it. Your journey isn’t done, and may never be, because there will always be a new mystery to unravel. Every subject and chapter of this book is just a doorway. It’s up to you to build and furnish the rooms to suit your needs.

With this strong foundation of understanding, there is freedom. Freedom to never be beholden to an inherited system, because as you now know, everything is adaptable. Everything is up for debate, and there is no challenge or roadblock that you can’t diagnose, dissect, or destroy.

Things I’m reading, watching, or listening to that have energized me:

Newsletters I read as soon as they arrive: 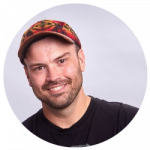 Brock Warner, CFRE (he/him) is a recognized leader in the nonprofit sector and author of the bestselling From The Ground Up: Digital Fundraising for Nonprofits. He has raised millions of dollars, and developed successful campaigns, partnerships, and sector innovations, and co-founded Broccoli in 2021. Brock is a sought-after presenter throughout North America, and is the professor of Integrated Marketing for Nonprofits at Humber College Business School’s Fundraising Management postgraduate program in Toronto.