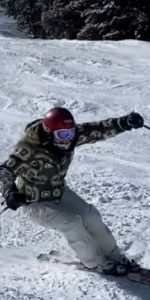 It was a lot of years ago, but it’s still a story I tell: I was skiing fast, right at my edge, which is on the high side. I snagged my ski in a bit of soft snow and went down hard onto my shoulder and my head. It was the second day in my life that I ever wore a helmet, inspired by my then-young children who wondered, reasonably, why I made them wear helmets when I didn’t sport one myself.

Despite my new red helmet (decorated lovingly by my children with cool alien stickers), I hurt myself pretty badly. In fact, I later – like a couple days later – learned that I had a severe concussion and a broken arm, but, believe it or not, I popped up out of that snow immediately, attuned only to my bleeding fat lip.

I skied down, took the lift back up and went to lunch. I was having a little trouble carrying my tray, but still didn’t accept the fact that I was hurt. I headed down, again on my own power, only a bit dizzy. Later, I went out to dinner, but couldn’t eat because I felt like throwing up.

Maybe it was the head injury that kept me in such an abysmal absence of self-care (I only went to the doctor two days later and only then because my boss sent me, noticing that I wasn’t functioning well). But I’m sharing this story again now because self-care seems like a really important topic in this moment. It’s been a summer of chaos: news stories that have led to despair and grief, travel that has been long-anticipated and difficult, more Covid … Maybe more reality than many of us want or welcome.

So, how do we nurse ourselves through life’s tougher chapters? Partly, I submit, by really flushing out the concept of self-care. Massages and take-out are a great start, but for most of us, not nearly enough.

From a recent look back at that ski accident, I learned another facet of self-care.

As I mentioned, my self-care post wipeout was horrible. Yes, part of that might have been related to the head injury. But now I understand: there was more at play.

Recently, it seems like the word “gaslighting” has become part of our vernacular.

A Google search reveals that this term originated in the 1944 film Gaslight in which a husband uses trickery to convince his wife that she is mentally unwell so he can steal from her. It’s more commonly used to describe a specific way one person manipulates a second person to deny that person’s reality and make them start to doubt their own truth and ground.

I’ve seen it at play often, and it’s pretty toxic. An example is when, say, I communicate an ouch to another person, maybe giving some feedback about the negative impact of something they’ve done or said, and they respond by telling me that it’s actually my fault. Or maybe they suggest that I’m overreacting or overly sensitive, or perhaps they let me know that a more “normal” person would have understood they were joking all along.

So, it was kind of a “drop mic” moment when someone listened to my story about my ski crash, and observed, “Wow, it really sounds like you were gaslighting yourself.”

Wait, what? Gaslighting myself? Is that even a thing?

Stay with me here: I fell skiing and didn’t really want to be injured. It didn’t line up with my identity of being a good skier. The implications of it on my ability to mother and work would have been very inconvenient had I submitted to the reality of being injured. I needed to be able to GO, and so my brain decided that my reality did NOT include being hurt.

So, rather than taking a moment on the snow to take inventory, to be kind to my body, I developed a narrative around the SHOULD (or, in this case, the SHOULD NOT). I should not be injured, I decided, and then I marched ahead with the reality I preferred, that I wasn’t hurt.

And ultimately, we can’t deny broken bones. They are real, and I had to succumb. But there are many ways we can and do “gaslight” ourselves.

One example is with our language. The other day, someone close to me talked about himself as being in stagnation. He hasn’t had or looked for a job in a few months. I suggested he might be gaslighting himself: what if he was wisely taking time, feeding a need for quiet and space and hibernation? The word “stagnate” argues a different reality, a giant SHOULD, and a lot of judgment.

When we read a news story that hits us in the gut, have a difficult travel day or a hard conversation and tell ourselves it wasn’t a big deal, or say “I’m fine” – that, my friends, is a form of gaslighting. Your body, emotional self or spirit have just had an experience; when you do the equivalent of popping out of the snow using your broken arm, you are denying the reality of what just happened.

Self-care and being vigilant for self-gaslighting look like a more tender approach. Here is something different to try:

1.       When you notice something has been hard, pause. Take inventory: what is your body telling you? Are you hurt physically? How about emotionally?

2.       Pay attention to the language you are using: Telling yourself you are fine, if it’s not true, is not nice. Using disparaging words towards yourself: also, not so nice.

3.       Find a way to BE NICE. To give yourself a break. To acknowledge that something is going on for you. Maybe it looks first like saying the word “Ouch” or saying, “That was hard” or “This is hard for me to be with.”

4.       Ideally, this is the point at which you feel your feels and find some courage and some patience with yourself.

Contrary to what our culture wants us to believe some days, saying Suck it up, Buttercup to oneself doesn’t actually make us better, more productive or healthier. First, we have to be with what’s true for us, even if it’s acknowledging that we are in a moment of suffering.

Then, and only then, can we set about moving ahead. 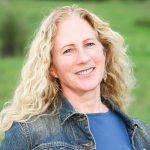 Margaret Katz Cann, part of the Fundraising Leadership team, is a Professional Co-Active Coach (CPCC, PCC), specializing in executive fundraising and leadership coaching, board training and consulting, Margaret works with nonprofit executives to stop tripping over their ask, to connect to passion and leadership – and step into the world of compelling fundraising. Margaret is an experienced and joyful fundraiser and is passionate about the intersection of coaching with fundraising. She still likes to ski fast.