You are here: Home / Coaching / Pulling Back the Curtain on Coaching for Higher Ed Leaders 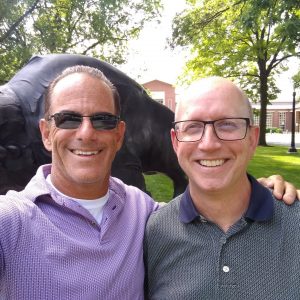 When I arrived at Bucknell University in 2016, I was thrilled by the challenges and opportunities that awaited me as the freshly minted dean of their prestigious College of Engineering. While my career in academia had seen a steady increase in leadership roles, I found myself in a whole new world. As excited as I was, I also recognized that there likely would be challenges ahead for which I had limited experience and (certainly) no formal training. Sure, I had terrific mentors but they have their busy “day jobs” some as presidents and provosts! And I already had made some strong connections with other leaders and faculty at my new institution. But would it be okay and appropriate to seek advice internally? I really didn’t want to reveal my uncertainties or my (gasp) ignorance!

As I thought about my desire to get advice from others, others outside of my institution, a small voice of my memory whispered about the possibility of a coach. “Executive coach” was the term, if my memory had served me well. But Executive Coaches were for C-suite executives at financial institutions, not coaching for higher ed leaders roles right? Uncertain, but still interested, I placed a call to my new colleague in HR who said, YES, it was a great idea to seek out a coach and they even gave me some suggested coaches to call and “interview” for the job!

Who do you want to be?

Fast forward two months … I had hired my coach, David Languilli, and we had gone through some initial onboarding that included a brave new world of “saboteurs,” “DISC profiles” and the “15 Commitments”. We had settled into a pattern of monthly one-hour meetings prefaced with interesting pre-work. Then one day, innocently enough, we were having a phone conversation (you read that right) about the decanal challenge of the week. The temperature (well … my temperature) was rising and we were heading toward an important juncture in our relationship, particularly what coaching is and what it isn’t. The conversation went something like this …

Me: So, as you can tell, I find myself needing to decide how to respond. What do you think I should do?

David: (longer pause as Pat wondering if the call had dropped…)

David: Who do you want to be?

David: Who do you want to be in this moment and in this decision?

That, I came to learn later, is what coaches call a powerful question. It stopped me in my tracks; it took me to 30,000 ft and even transported me to the future version of myself who could look back on my time as dean and provide the perspective on how to navigate my decanal dilemma.  I learned quickly that coaching for higher ed leaders is not what I thought it was.

Once I had that perspective as a foundation for what to do next, what I had originally sought from David – advice like a consultant would give – now seemed so transactional. What he had given me as a coach was a growth opportunity to analyze any problem and approach it as not just any higher ed leader, but as this particular leader: me. As I would come to learn later, this methodology is called Co-Active® coaching, the “co” part being the role I played in developing as a leader – as a person – as I navigated the particular challenges I was faced with at the time. I am happy to report that that particular situation – what turned out to be a Crucial Conversation – went really well! Even better, I developed in my understanding of myself, best practices in inclusive conversations, and increased clarity on my role as dean.

Perhaps you can relate to this approach of developing others if you have served as a research mentor, as a teacher, or even as an older sibling or parent. In the former case, as we mentor research students, we do our best to train them in ways of approaching problems, ways of thinking, and ways of becoming the unique researcher that is distinctly them. All while simultaneously responding to the challenge of the moment. Coaching – good coaching – is just like that. And just as mutually fulfilling.

I don’t have the time!

By now, I might have caught your attention about the value of a coach and a little bit about how coaching for higher ed leaders works. And now you may be thinking, “I don’t have the time for this.” Believe me, I hear you. And I’ve seen your calendar (well, not your actual calendar, but you get my drift) – yipes! But ask yourself this – is it really that you don’t have the time or is it that you don’t have the energy? If the latter, please consider that energy is not conserved. If energy includes our motivation, our will, and our enthusiasm to run toward the fire then it has been my experience that such energy can be created. With curiosity as fuel and the world and its minds, hearts, and souls around us as oxygen, a trusted coach can be the catalyst who initiates the creation of this kind of energy. And then time lost unnecessarily to stewing on a tough decision or meetings on repeat like Groundhog Day can be regained. One hour a month can give back many times.

As I wrap up my fifth year as dean, it feels good to reflect on what I’ve learned with David and more recently with coach-extraordinaire, Janice Cunning. I’ve consumed well over 50 books – some multiple times, listened to countless podcasts and developed a personal strategic plan complete with core values and mission and vision statements. I now welcome difficult conversations and even enjoy running book clubs. But, best of all, my coaches have helped ignite a curiosity about leadership – about people – that brings great joy to my role as dean. As much as we seek to instill a sense of lifelong learning in our students, it’s with great optimism that I’ve discovered a curiosity about others and myself that gives me both energy and time to be the best Dean I can. Thanks, David and Janice.

The 15 Commitments of Conscious Leadership by Jim Dethmer, Diana Chapman, and Kaley Klemp

Pat Mather is the Dean of the College of Engineering at Bucknell University.  In addition to his academic interests, he enjoys recording and performing as a musician (he plays bass, drums, and guitar), road cycling, and classic movies — especially film noir. He and his wife, Tara Mather, live in the Susquehanna Valley of central Pennsylvania.