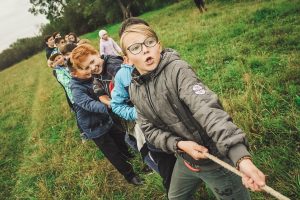 “Hey Kimberley, you had something to do with that didn’t you?”

Being called out in front of a couple of hundred other fundraisers by internationally renowned fundraising copywriter Tom Ahern took me off guard. Tom was talking about a now iconic direct mail pack.

This direct mail package was created in 2010 by the very talented duo Jen Love and John Lepp from Agents of Good, and has been shared hundreds of times at conferences and webinars around the world to demonstrate innovation, creativity, surprising and delighting donors and taking a massive leap of faith.

This mailing also appears in David Love’s new book Green Green, Reflections of 51 years of raising money for nature as an example of best practice.

So how did I respond to Tom’s question in front of so many colleagues? “Why yes Tom, I did. I was the Director of Fundraising that supported, approved and paid for the package.” Such a simple exchange. But there is so much more to it.

This is a story of how I influenced a fundraising program to take a massive “off brand’ risk that resulted in double digit growth and a shift in organizational culture. A seemingly simple direct mail pack known as ‘the Ruby appeal’, was the result of a lot of work behind the scenes. I am sharing with you here, what I learned along the way.

A Bull in a China Shop

One year before the Ruby appeal, I was the brand-new Director of Development. The team had lost confidence in the fundraising function, the fundraising staff were complacent, and I think it is fair to say the program was floundering.

I spent the first two weeks on the job just listening to people whispering and complaining about my predecessor. Everyone blamed one person for the challenges the organization was experiencing, and everyone seemed to expect one person – ME – to be the magic bullet. While I knew that my predecessor was not solely responsible for the current situation, I was determined to deliver results – fast.

Sadly, I came in too hot. I see that clearly now. A lot of people in senior fundraising roles tend to fall into the same sinkhole. As a new hire, there is a tendency to want to live up to what can sometimes be, unrealistic expectations.

I was so caught up in trying to prove I knew what I was doing, I didn’t take the temperature of the room. As a result, I overcompensated and alienated the entire team in my first three months on the job. I felt like quitting and I knew that my boss was regretting her decision to bring me in.

After several months of floundering, feeling like a failure and disappointing the team I needed to take a fresh approach. I needed to call on more humility. I needed to be more curious about everyone else. I needed to listen more and “direct” less. I needed to be confident enough in my skills to not have to prove my worth every, single, second. Most importantly I needed to create an alliance with the Executive Director. My boss and I had to move from what Adam Grant refers to in his book Think Again, as “emotional conflict” to “task conflict”. It was all a lot of really tough, emotional work. Thankfully we both wanted it to work out and it was totally worth it.

One year later, our Direct Mail vendor, enthusiastically pitched a special appeal that was off brand, with a bird’s footprint as the only design element on the outer envelope and a letter written in the first-person voice of a hummingbird. My immediate response was: “WTF! You want me to pitch what?!” It felt too big and too hard an ask for a team that I was just starting to feel a part of. Still, it was kind of a cool idea, so I took on the challenge.

My first step was to get my boss onside. Since we had done the emotional work of developing a mutually respectful relationship, I felt safe to ask her to take a chance. We decided to go for it and got communications and the rest of the team on board. We didn’t NEED “approval”, but fundraising is a team sport and we wanted the team onboard.

As a result, there was a shift in organizational culture. This shift resulted in a complete transformation of the fundraising program. The relationships that were built, the trust earned and the willingness of the entire team to get involved was the key to improving results across all revenue streams. Eleven years later, the benefits are still being realized with double digit growth across all revenue streams. The real bonus is that everyone is sharing in the success, because that is what happens when fundraising is actually a team sport!

I have since moved on to work as a consultant helping other organizations create culture shifts that revitalize fundraising programs. I have distilled four key influencers that create the change needed for a robust, healthy and abundant culture.

If you want people to change their mindset or behaviour, they need the following from you:

Tell people about a time when an entire organization came together to do something differently and took one small risk. Share how that risk transformed the entire fundraising program. Feel free to use the story I’ve shared here. Then ask a simple question: I wonder how that example might work for us? Start this conversation with the person who has the most influence or power. That may be your boss, it may be the Director of Communications, it may even be the receptionist. You know the power dynamic in your organization. Use a compelling story to build an alliance. Now you have an ally. Then ask that person to help you influence others on the team.

As fundraisers we often present tactics, ideas and theories in team meetings only to receive a nice pat on the head. After our turn the team usually moves on to talk about things they know and are excited about. Sadly, the fundraising function remains a mystery that happens “over there”. It doesn’t have to be that way.

Instead of talking about money, use your time in staff meetings to be curious about touch points that staff members have with donors and prospects. Ask them if they might like the opportunity for increased involvement with people who already care about the cause. Move beyond the tactics of fundraising and shift to conversations about how the team can help people become more engaged in the cause. Go deeper, be curious, talk about mission delivery not money.

Here is one example that worked well from the case study above. Donors were calling in to make donations and were being transferred to voicemail because sometimes the person who answered the phone wasn’t in the fundraising department. So, we talked about a mutual desire to provide great “customer service” and for all donors to be helped enthusiastically. Everyone agreed that they would keep a pledge form in their desk and was coached as to how to navigate the conversation. BOOM – we were all fundraisers!

Notice small wins with people from outside the fundraising department and be sure to provide public reinforcement. Perhaps someone identified an opportunity to engage with a donor or made a thank you call. Make sure they are recognized for this extra effort. If managed with grace and gratitude, small acts that demonstrate that fundraising is a team sport, if reinforced, will multiply. I promise.

Remember the bull in the china shop? Park your ego and lead with humility and grace. Be curious about how you can support the work of others. Be sincerely interested in learning how you can make other people’s jobs easier. Approach your work from a position of service to others and it won’t be long before you start to see that you are no longer being treated like an “other”. This shift in attitude, demonstrates and spreads the kind of culture that organizations need to be successful. At the risk of being cliché: Be the change you wish to see.

As I write this, we are all in recovery from the collective trauma of a global pandemic and a racial reckoning. Our humanity is on full display and we aren’t sure exactly what our social and professional structures will look like when we emerge. I think now is the perfect time to reset. Make the most of this odd moment in our history to rebuild alliances and reframe structures within your organization in order to improve results.

By having sometimes difficult conversations and focussing on task conflict rather than emotional conflict, we can create a healthier more abundant culture for our organizations. Trust me, I know without a doubt that if you change your culture, you WILL change your results and the world WILL thank you.

Kimberley is the Founder and CEO of The Intersection, a social enterprise focused on candid conversations and meaningful connections. An award-winning fundraiser, Certified Fundraising Executive, AFP International Master Trainer Kimberley helps people create transformative results for their organizations and thrive in their jobs.

Kimberley has been in the fundraising trenches since 2001. Her podcast “The Intersection Hub” is frequently listed as one of the top five non-profit podcasts in Canada. She was a driving force in the early days of SOFII.org has served as Editor for Hilborn Canada’s eNEWS, was a member of the Advisory Panel for the Rogare Think Tank at Plymouth University and an executive member of the Planned Giving Council of Simcoe County and currently serves on the board of directors for the Ontario Land Trust Alliance. She is a mother of two, stepmother to six. You can reach her at k@kimberleymackenzie.ca or @kimberleycanada on social media.