You are here: Home / Leadership / Managing to Retain Fundraisers 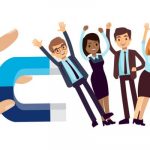 In the marketplace for fundraiser talent, demand currently outstrips supply.  There are currently thousands of job postings for fundraisers listed at the Association of Fundraising Professionals (AFP), The Chronicle of Philanthropy, The Council for Advancement and Support of Education (CASE), and LinkedIn.

In the face of this demand, advancement and development leaders often say that one of the most significant challenges they face is managing to retain fundraisers. While the economic forces of supply and demand are putting upward pressure on salaries, a common misconception about fundraiser retention is that it’s “all about the money.” That’s a management and leadership cop-out, and the situation is dire. According to a recent Association of Fundraising Professionals’ (AFP) report, half (50%) of fundraisers surveyed reported that they intend to leave their jobs in the next 2 years.

That’s astounding!  Imagine losing half your fundraising staff over the next 2 years.

Development and advancement leaders with whom I work know that retaining their fundraisers is especially critical because of the intimate connections that they have with donors.   When fundraisers leave their jobs, those relationships are impacted and fundraising results can suffer.

There are definite and tangible actions managers and leaders can take to head off this disaster.  The first is to recognize that most (if not all) employees are not straight about WHY they leave.  There are many reasons for this, not the least of which is wanting good recommendations and referrals for future employers.

Thankfully, we have the work of  Leigh Branham,  a career transition coach and author of The 7 Hidden Reasons Employees Leave: How to Recognize the Subtle Signs and Act Before It’s Too Late.  In an effort to authoritatively document the root causes of employee disengagement and voluntarily turnover, Branham contacted the Saratoga Institute in California, considered by many to be the world leader in third-party exit interviewing and employee commitment surveying. The Saratoga Institute had a database of 19,700 exit and current employee surveys it had conducted for organizations in 17 different industries.  Branham analyzed the data and verbatim comments from these surveys.  It was this research that led to the publication of the book.

The research Branham conducted indicated that the “reasons” for departure are hidden from the very people who most need to see them clearly—the managers charged with engaging and keeping valued employees. The data showed that while 90 percent of managers believe that most employees are “pulled” away by better pay, 90 percent of voluntary turnovers are caused by something besides money.  This astounding disconnect between belief and reality allows managers to deny responsibility for correcting and preventing the root causes of employee disengagement and departure.

Branham found that among seven reasons employees depart voluntarily, five of them can be influenced  by management and leadership:

The other two reasons (the job or workplace was not as expected, and there is a mismatch between job and person) are related to the recruitment process which is the topic of another post.

Fundraisers are an ambitious group (bordering on hyper-achieving). Nothing is more frustrating for an ambitious fundraiser than discovering he or she is out of personal or career growth runway. In today’s nonprofit environment, it is incumbent upon the senior leaders on nonprofit teams to have a process that reviews all employees in the organization for development opportunities.

It’s also important to keep in mind that fundraising can be stressful and thankless work. The demands to raise more money are never-ending, and while the donors are thanked for their generosity, fundraisers are frequently overlooked. Creating an environment of appreciation, recognition, and gratitude – not only for donors but also for the fundraisers who work with them – goes a very long way on the path of retention. A culture of appreciation helps fundraisers feel good about the work they are doing, but it does not address stress and the work/life imbalance that often accompanies the fundraising profession. Dealing with this factor is among the top reasons advancement/development leaders work with an external professional coach.

Also, on fundraising teams, it’s not uncommon for managers and leaders to overlook those with whom they work each and every day. As the saying goes: “familiarity breeds complacency!”  This is especially true in the nonprofit world where financial rewards for results are limited and work can be overwhelming.  Managers and leaders can learn to coach, acknowledge, and challenge their teams in a way that is safe, and yet not comfortable.

Leaders CAN reduce stress and overwhelm in their organizations when they commit to a culture of play, improvisation, and laughter. In honoring this commitment, individuals look to maximize energy (not manage time), while getting sufficient rest and renewal.

Finally, at the most basic level, fundraisers want to know that they can be successful in their roles.  They want to work with leadership that has integrity and is trustworthy. All too often there is confusion, competing priorities, lack of vision, and poor alignment and communication. That is a ready-made formula for turnover.

In this regard,  Janice Cunning, Michelle Maloy Dillon and I created an online training program for fundraising leaders and managers where they learn and practice essential skills for retaining employees such as:

According to Branham, what every employer needs to know is that 95 percent of voluntary turnover is avoidable.

While the employees share much of the responsibility for staying engaged, most of the levers that increase employee engagement lie within the power of the direct manager or senior leaders to control. Too many nonprofit organizations ignore this reality or rely on pay, benefits, or other perks even though the research shows that the most powerful solutions for retaining employees involve the more challenging intangibles, such as good management and leadership.

David Langiulli is an executive coach and trainer who helps nonprofit leaders and their teams flourish and thrive.